Home > New Relationships > When You Want to Marry Again

When You Want to Marry Again 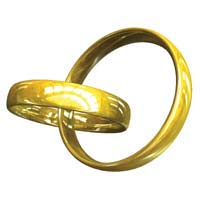 Deciding on marriage with your new partner is a big step. It’s an even bigger one if you’ve already experienced divorce. You know the pitfalls and that there are absolutely no guarantees in this life. So, if you do decide on re-marriage, you’re doing it very much with your eyes wide open. Hopefully, too, you’ll have taken lots of marriage advice – only this time it will be from friends and people who are older and wiser.

But why would you want to have a second marriage, and what should you know beforehand?

Over two in five marriages – actually 45% - end in divorce, and half of those occur in the first ten years of marriage, giving the UK one of the highest divorce rates in Europe. What that means, essentially, is that you have a very good chance of your marriage ending up in the divorce courts.

But after divorce and recovery, we find new partners and decide to try it again. A lot of second marriages do work, because we’ve learned from the mistakes we’ve made, and we have a much better idea of what we want, and the partners we choose want very much the same things, as a general rule.

Why do we Undertake Second Marriages?

Living together is very accepted these days, so why would someone want a second, or even third, marriage?

There are several reasons. For some it’s religious, in that marriage is sacred in the eyes of God, and if a couple is going to live together, it should be in marriage. That’s a matter of choice, obviously, and for many, and not just those who attend church regularly, it’s what they believe.

Perhaps the biggest reason, though, is the security marriage brings. Yes, living together is a commitment, but one constant piece of marriage advice is that the glue is stronger with marriage. To an extent it might even be true. But the old adage of it being easy to walk away from a live together relationship no longer applies, with entwined finances and joint ownership of property. Still, a ring does bring a sense of belonging, and it’s possible that people do try harder if they understand there’s that legal process of divorce if they split up - especially if they and their partner have both been through it before.

There, at least, all that marrying advice you’ll receive is good. The more stable a household, the better, especially if you have kids.

Re-marriage isn’t something to be undertaken lightly, and people who’ve been divorced once are always wary, plus the marriage advice they receive is always urging caution. However, if you both truly believe it’s the right step after many long discussions, then it probably is. For a second wedding, however, a small ceremony is usually better – after the first time you don’t need all the pomp and circumstance, not to mention the expense, as you have other things you need to spend your money on!