Home > Facts & Figures > Am I Statistically Likely to Get Divorced? 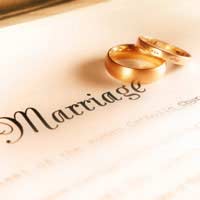 Nearly one in two marriages will end in divorce. That’s a depressing statistic in itself, but there are other factors that may make you more likely to divorce than others. The average age at which people are divorcing is rising, partially because people are getting married later in life. For example, in 1997, the average age of a divorcing man was 40.2 years old, and a woman was 37.7 years old. Nowadays, the average age is 43.7 for a man and 41.2 for a woman. People aged between 25 and 29 years are the most likely to get divorced in the UK.

Living Together Before Marriage

Research has found that couples who live together before they marry are more likely to divorce than those who do not. This may sound surprising, as many people think that co-habiting is in effect a ‘trial marriage’. For example, a study in 1997 found that after eight years of marriage, 23% of men and women who had lived together before marriage had divorced, while only 16% of men and 18% of women had divorced who had not previously co-habited. This statistic may be explained by the fact that those who had not co-habited prior to marriage had a more traditional approach to the partnership. US studies show that people who co-habit have higher expectations in the subsequent marriage than those who do not.

If you have children, you are less likely to divorce. Although some couples stay together for the children's sake, there may be other couples who put off having children because they are unsure of their marriage. People who have more than two children are also statistically more likely to divorce than those with two or fewer children.

If the wife in a marriage works, this also increases the likelihood of divorce. A comparison of international studies showed that women in America (where the female workforce is large) are much more likely to divorce than women in Southern European countries, (where many fewer women work.) That said, women who are financially independent are more likely to consider divorcing, and those who are thinking about getting divorced are more likely to go and get a job. In 2008, 67% of divorces were granted to women as petitioners.

Owning your own home decreases your risk of divorce, for two reasons: it increases marital stability because of financial reward (as opposed to renting), and couples who live in their own home are more likely to be attached to their homes and less likely to want to have to sell it.

Spouses who have experienced mental or emotional difficulties at the age of sixteen are more likely to divorce than those who don’t. People in this category often divorce a few years after the marriage, which may be explained by a poor choice of partner due to lack of emotional wellbeing.

People who marry in a church are less likely to divorce than those who have civil ceremonies. This is partially due to the fact that those who are actively religious and go to church are more likely to have a traditional attitude towards their marriage.
Next Page

High Profile Divorce Settlements
Share Your Story, Join the Discussion or Seek Advice..
@Lofty -Many marriages go through tough times, it comes as a real shock if one of the partners was not expecting a marriage to end. But you have to try to respect her views. By respecting her views, it doesn't mean there isn't a possible way back. Sometimes separation and distance for a while can lead the instigator of the split realise they may have made a mistake. However, the best course of action is not to try to undermine her decision (especially through arguing and name calling etc), name calling really isn't permissable at any level. Somewhere, back along the line was a man that your wife fell in love with and made a decision to marry. The fact you have given her a great life does not count for much where emotions are concerned. The fact she is willing to give up this 'great life' for another life means something, somewhere has gone wrong. Trying to rectify that is one possible option, but it may be that you also may have to let go and give her the space she needs until she sorts her own head out. :( I hope it works out for you - it might even help in changing you as a person if her reasons are genuine and if you deep down inside know that you have ben rude and have tried to undermine her confidence by calling her names.
Sara78** - 8-Aug-17 @ 1:53 PM
My wife has filed for divorce using unreasonable behaviour she say that in the 20 years we've been together I have never treated her with respect or trust and that I have been rude to her . Yes I have called her names and use badlanguageon the very oddOccasion but I have given her a great life because I work very hard my wife has not worked for 10 years and has done a great job bringing up are two children to say this divorce has come as a shock is a understatement I'm in bits but she say there's no going back . About a year ago she started getting intospiritual things and speaking to healers she now say we do not have the same outlook in life and doesn't enjoy been in my company and wants me to leave are home in which we just bought 3 months ago she has seen asolicitorand say I will get thepetitionsometime this week I don't want to give up on my marriage I love her & my kids with all my heart I'm in bits and don't know want to do because when I'm at home she will go to the spare room we're she sleeping and not talk to me when I try to talk she just shouts at me and say it over ( can't you get that in your head)
Lofty - 7-Aug-17 @ 5:01 PM
Title:
(never shown)
Firstname:
(never shown)
Surname:
(never shown)
Email:
(never shown)
Nickname:
(shown)
Comment:
Validate: